Time could be running out for American businesses and homeowners to receive the full amount of the federal Investment Tax Credit (ITC) for installing solar (photovoltaic or PV) systems, and it couldn’t be worse timing for California.

Beginning January 1, 2020, the ITC is set to begin stepping down. Recently, the California Independent System Operator (ISO) announced, in a response filed with the CPUC, an anticipated capacity shortfall of over 2,300 MW beginning in 2020 and growing to over 4,700 MW in 2022 during the annual hourly peak which usually occurs in September. Currently there is legislation introduced in the house and senate, which would extend the full 30% tax credit for another 5 years and make stand-alone battery energy storage systems (BESS), eligible for the same credit amount. Ultimately it will take a multi-pronged approach to solve California’s capacity shortage, but higher costs won’t help.

What is the ITC?

Also known as the federal solar tax credit, the ITC provides a tax credit equal to 30% of the cost of installing a solar system, including any necessary roof work or replacement. The ITC was established as part of the Energy Policy Act of 2005 which was passed by a Republican-led Congress, signed by President George W. Bush and enacted in 2006.

The current ITC does not have a cap for residential and commercial systems. You can claim the tax credit after installation and construction of system is finished – provided it is fully operational by December 31, 2023. In March 2018, the IRS clarified that batteries are also eligible if they receive most of their energy from solar panels. Currently, stand-alone battery energy storage systems (or BESSs) are not eligible for the ITC, but the Energy Storage Tax Incentive and Deployment Act has been introduced into both the Senate and House (S. 1868 and H.R. 4659) to change this.

Currently the ITC is set to step down beginning on January 1, 2020 and complete reductions through 2022. The credit schedule is as follows.

2022 and onwards. Residential: No credit for residential solar. Commercial: 10% of the system cost.

You’re eligible to receive the ITC provided you own your solar energy system and are a tax paying entity. If you don’t have enough tax liability to claim the entire credit in one year, you can roll over any remaining credits into future years while tax credit is in effect.

Non-tax paying organizations, such as school districts, can still benefit from reduced electricity rates when entering into a Power Purchase Agreement (PPA) instead of purchasing a solar system. A PPA is an agreement to purchase electricity at a reduced rate for a fixed period (typically 15-210 years) to a system owner/developer who installs, owns and operates the system. The PPA model allows a tax equity investor (e.g. big business or bank) to claim the ITC that the non-tax paying organization is ineligible to receive in exchange for the lower electricity rate. Many school districts engage in a PPA to reduce the utility bill and also benefit by not being responsible for operations and maintenance of the system, which remains responsibility of the system owner.

Proposed Extension for the ITC

In July 2019 the Renewable Energy Extension Act was introduced to extend the ITC by 5 years before stepping down. It is a bi-partisan bill filed in both the House (HR 3961) and Senate (S 2289) by Senator Catherine Cortez Masto (D-NV) and Representatives Mike Thompson (D-CA), Paul Cook (R-CA), and Brian Fitzpatrick (R-PA).

What Are the Benefits of ITC?

Besides lowering the cost of solar systems, the ITC helped created over 200,000 jobs and stimulated over $140 billion in the US economy, growing solar deployment by more than 10,000% which helps reduce greenhouse gas emissions and increase resiliency.

Are There Tax Credits for Energy Storage Systems?

A stand-alone BESS is not currently eligible for the ITC. Though, the Energy Storage Tax Incentive and Deployment Act, introduced in 2019, intends to make those systems eligible for the same 30% tax credit.

Both in the case of the ITC and MARCS public entities are not eligible for either incentives. Read more about the incentives and eligibility here.

With California facing peak electricity demand shortfalls of thousands of megawatts in the coming years, it is imperative to increase energy storage during these peak demand times where solar generation is only a fraction of its maximum capacity. The California ISO predicts the shortfall to occur in September, which is typical, during peak usage hours extending from 5-7 PM PST in 2020 to 5-8 PM PST. The graph below from the response filed with the CPUC shows the predicted shortfalls increasing in magnitude from 2,300, 4,400 MW and 4,700 MW in 2020, 2021 and 2022 respectively during those hours. 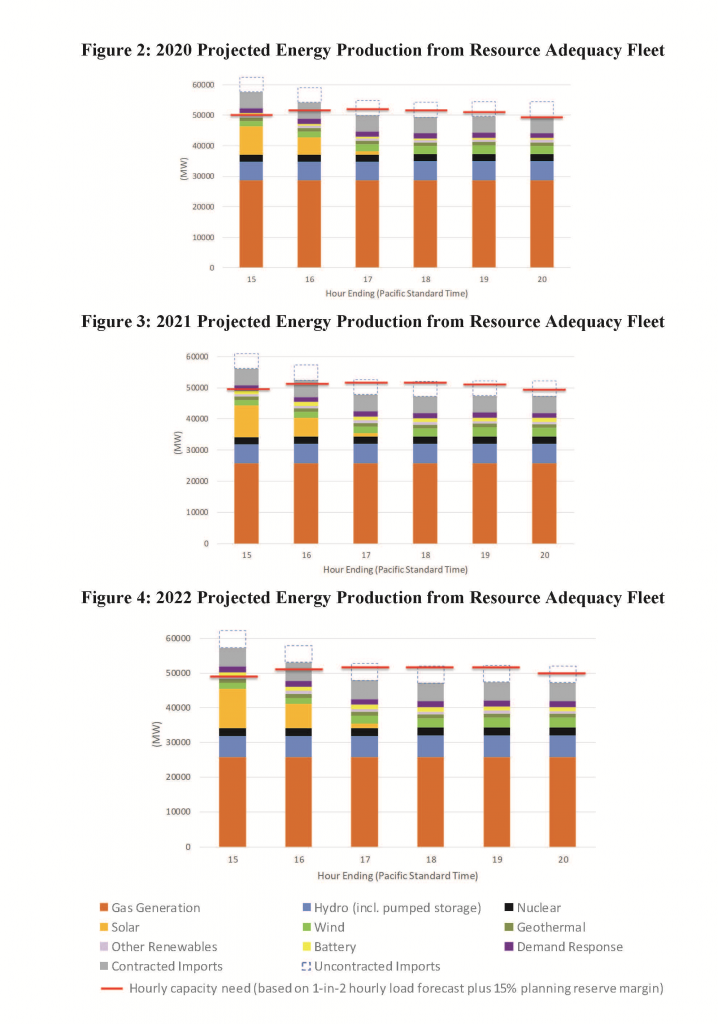 Energy storage systems could help offset the grid load and reduce this shortfall, but with limited time and large capital investments necessary to bring them online before next year, they’re not the only answer.

What You Can Do to Extend ITC?

If you’d like to see the ITC extended or expanded to stand-alone storage systems You can contact your representatives in the US House and Senate let them know you want them to vote YES to extending the Solar Investment Tax Credit, Bills H.R.3961 and S.2289. You can find your representatives office number, by calling the Capitol switchboard at 202-227-3121 or visit: https://www.house.gov/representatives/find-your-representative.

Another option is to send your Congressional representatives a free postcard sponsored by non-profit organizations Solar United Neighbors and Vote Solar. They will print and mail it free of charge.

It feels like every day there is new evidence supporting a change to how we generate power, reduce our usage and when we use it. With high costs a large barrier to increasing installation of renewable energy sources and battery energy storage systems, it is imperative we find ways to lower these costs. Reducing energy needs also helps reduce costs by decreasing the required systems size. If you need help lowering your energy use and exploring renewable and storage system options, contact us anytime.

This website uses cookies to improve your experience while you navigate through the website. Out of these, the cookies that are categorized as necessary are stored on your browser as they are essential for the working of basic functionalities of the website. We also use third-party cookies that help us analyze and understand how you use this website. These cookies will be stored in your browser only with your consent. You also have the option to opt-out of these cookies. But opting out of some of these cookies may affect your browsing experience.
Necessary Always Enabled
Necessary cookies are absolutely essential for the website to function properly. These cookies ensure basic functionalities and security features of the website, anonymously.
Functional
Functional cookies help to perform certain functionalities like sharing the content of the website on social media platforms, collect feedbacks, and other third-party features.
Performance
Performance cookies are used to understand and analyze the key performance indexes of the website which helps in delivering a better user experience for the visitors.
Analytics
Analytical cookies are used to understand how visitors interact with the website. These cookies help provide information on metrics the number of visitors, bounce rate, traffic source, etc.
Advertisement
Advertisement cookies are used to provide visitors with relevant ads and marketing campaigns. These cookies track visitors across websites and collect information to provide customized ads.
Others
Other uncategorized cookies are those that are being analyzed and have not been classified into a category as yet.
SAVE & ACCEPT
Powered by